Champion athlete from Cummeragunga in the 1920s

Lynch Cooper is perhaps best known for winning the prestigious foot race, the Stawell Gift, in 1928 after two previous attempts. That year, a record amount of prize money was offered – £250. In addition to the prize money, Lynch bet all the money he had on himself at 60:1 and won. Four Indigenous athletes – Booby Kinnear (1883), Tom Dancey (1910), Lynch Cooper (1928) and Josh Ross (2003 and 2005) – have won five Gifts between them.

Listed amongst 125 Greatest Ever Stawell Gift Moments is this fact:
"A record £250 was on offer to the winner of the 1928 Stawell Gift. In the 51st running of the Gift, Jeparit’s Lynch Cooper won by inches in 11.9 off 8 yards.”

The following year, Lynch also won enough points after the World’s Sprint Championship in Melbourne to be declared the worlds professional sprint champion for 1929.

He was living in Jeparit when he won the Stawell Gift but he moved to Yarraville in the 1930s. Lynch Cooper, son of William Cooper, lived at 92 Tarrengower Street, Yaraville.

For more on Lynch Cooper, go to Colin Tatz’s Aborigines in Sport which covers all sorts of sport from darts to tennis and football.

Other champion athletes from Cummeragunga in the 1920s included Alf Morgen and Billy Russell as well as the sprinters: Eddy Briggs, Doug Nicholls and his brother Dowie Nicholls. 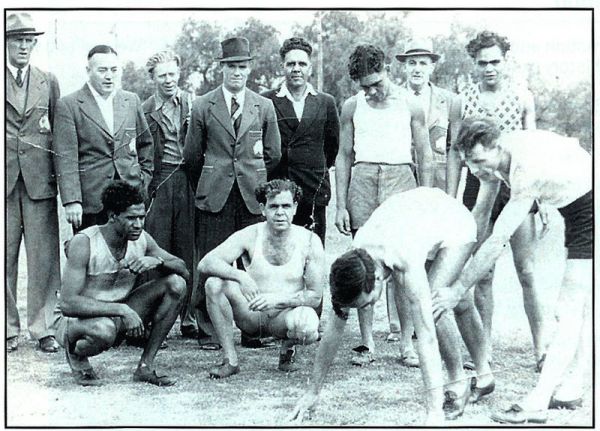