Connie Hart was a well known Gunditjmara basket weaver who was born in South Western Victoria and lived in Footscray during the 1930s.

Connie Hart is mentioned in the Maribyrnong Aboriginal Heritage Study: “Connie lived in Footscray. Connie retained great knowledge in the manufacturing of weaved baskets, but her place of residence could not be identified in this study”.

While the authors of that report could not find where Aunty Connie lived in the area and other sources suggest that, during World War II, Connie lived in a flat in Fitzroy, it is certain that she did work at the munitions factory in Maribyrnong along with Margaret Tucker.

Connie Hart is perhaps best known for facilitating the regeneration of Victorian Indigenous weaving. The following is an excerpt from a biography of Aunty Connie from Design and Art Australia Online:

"Connie Hart, Gunditjmara basket weaver, was born in 1917 in Little Dunmore, near Lake Condah Mission in South Western Victoria. Connie attended the mission school during her childhood, but was always attentive to the stories and practices of her mother and her elders while she was growing up. When she was sixteen she began to work as a maid and cook for properties in the western districts of Victoria, before she moved to Melbourne. During World War II she worked in a munitions factory, and in later years she worked as a wardsperson at St. Vincent’s Hospital, and in a shoe factory.

Connie only began basket weaving in 1983 at the age of 65. Having returned to Little Dunmore to care for her mother who had suffered a stroke, Connie recollected the baskets that her mother had made from Puung’ort (spear grass) grasses when Connie was a child.

Connie went on to craft a great variety of baskets, as well as eel traps and baby carriers. She passed on weaving methods to a number of members of her family as well as many other Indigenous and non-Indigenous people through basket weaving workshops.”

The Culture Victoria site shows examples of Aunty Connie’s work some of which are at the Koorie Heritage Trust.

The following is from Living Aboriginal History of Victoria: Stories in the Oral Tradition (1991) by Alick Jackomos and Derek Fowell (Cambridge University Press: Cambridge).

"No one taught me to make my baskets. I used to watch my mother do it and when she put her basket down and went outside, I’d pick it up and do some stitches. When I heard her coming back, I would shove it away real quick and run away. I was a great one for sitting amongst the old people because I knew I was learning something just by watching them. But if I asked a question they would say, ‘Run away, Connie. Go and play with the rest of the kids.’ They didn’t want us to learn. My mum told me we were coming into the white people’s way of living. So she wouldn’t teach us. That is why we lost a lot of culture. But I tricked her. I watched her and I watched those old people and I sneaked a stitch or two.

I was about seven when I used to have a go at my mother’s work but I didn’t make a basket until after she died. It must have been years but I remembered the stitch, I remembered the grass. I picked some grass and I went home and started to do the stitch. The ﬁrst basket I made was a little one because I was frightened to do it. Then I went on to make mats. I think if my mother was alive today she would knock my head off because I have gone on to better things.

My stitching is very tight, where most basket makers pull theirs loose. I put my ﬁnger behind and pull it tight. Everybody says my work is ﬁne. I’m growing my own grass in the garden. I’m hoping for it to spread along the fence, and I just go down and get some whenever I want it.

To make a good basket, patience would be the ﬁrst thing. And to pull tight for that tight stitch.” 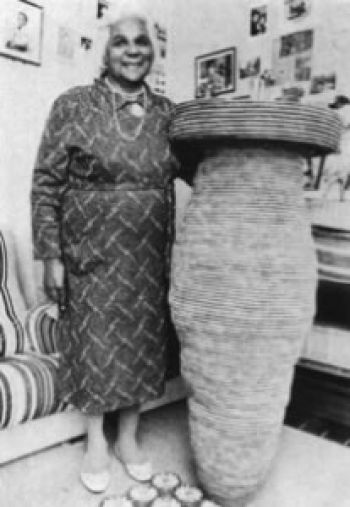